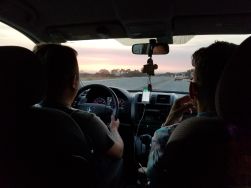 The dream began with NiK Kacy for me. Two friends, knowing my love of masculine of center shoes, separately approached me about supporting NiK’s KickStarter campaign in early 2015. NiK’s vision, mission, and purpose bonded us in a true bromance. Supporting a queer owned business, understanding the impact to the community, and learning about the challenges and rewards associated ignited a spark. NiK introduced me to a community of queer fashion visionaries previously unknown to me – even ‘crashing’ my and Megan’s Vegas wedding with a few. It was a new sort of ‘coming out’ for me.

Megan and I traveled to Austin to attend the historic DapperQ Queer Style panel at SXSW in 2016, supporting Leon Wu – panelist, owner of Sharpe Suiting, and alleged ‘wedding-crasher.’ Listening to panelists speak about queer fashion as visual activism gave me thoughtful appreciation of how I present myself in the world. Whether it’s for that conservative friend unaware of their privilege and the impact of social politics or that in-the-closet on-looker who is petrified of what life has in store – visual activism offers meaningful discourse as thousands of verbally silent words are revealed in the pictures we paint.

Anita Dolce Vita has done a tremendous service cultivating and elevating the community with her tireless dedication to DapperQ’s voice and reach. A true visionary carves paths that others realize they must travel — a true road less traveled by. My dream had purpose — to walk in the annual DapperQ NYFW fashion show and participate in an evolving conversation.

In July of 2016, after being introduced to THÚY Custom Clothier by NiK Kacy, Thúy and I designed a Boardwalk Empire inspired suit together. Both the experience and the resulting suit shifted my paradigm.

After Thúy was accepted to participate in the 2018 DapperQ NYFW show – Dress Code – she asked if I’d be interested in walking for her. Forcing restraint I responded, “More than anything!!!” Initially I only told an intimate few for fear that if I spoke it aloud it would disappear. Eventually I let it wash over me. I shouted it from the rooftops!

We designed a new suit with bold and subtle details – including lining the underside of my blazer lapel with the stunning butterfly lining I selected. When the suit arrived I nearly lost my mind. It was a true dream suit. 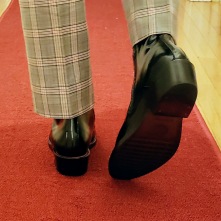 I knew I couldn’t walk my way without appropriate footwear. Thankfully I just received my Georgio boots from NiK Kacy Footwear that same month. I pulled the boots on while wearing the suit and felt like a queer empowered feminist Cinderella. NiK would be walking with me.

Megan and I skipped to Oz with Maddi (beloved niece), mom, and dad. Along the Yellow Brick Road, Frankie (master barber; ‘lil big bro’) and Rachel (make-up artist; bombshell) joined. The canvas of Thúy’s teams head and faces would be in the best of hands.

The night before the show I flopped around the bed like a goldfish just escaped its tank. How do you sleep when you are about to awake to the dream? I recorded each moment of the day in my head and heart – each step, breath, sight, interaction intentional.

Arriving at the museum we immediately stumbled into Thúy – with epic family crew. Staking claim to a spot back stage, the team started gathering. I found my partner in crime and shoulder devil, Millz. She coaxed me to lose the bow tie and untuck my shirt in the backstage heat. It started to feel like a pajama party without parental supervision.

Megan got to work on capturing behind the scenes photos and interviews with models, volunteers, and designers from the show. She told me about those who didn’t want to share their names or stories for heart-breaking fear of being outed in their world. Repercussions for visibility and invisibility are immeasurably high.

Time for hair and make-up, Frankie and Rachel soon arrived – after taking the red-eye from Atlanta to participate in my dream and jump into the deep end of a revolutionary queer fashion scene.

Frankie invited me to sit down, took out his clippers, and started prepping me for my day-of-show style. I was tempted to flip the smock draped over me and wear it as a cape in the moment but resisted — soaring already.

Thúy instructed Rachel to keep my make-up ‘natural.’ Since lip gloss is my idea of making myself up, ‘natural’ wasn’t in the cards. My face squinched, stretched, puckered – I looked like a human-emoji-gif.

Twice I approached Thúy to reveal my painted face. Twice she sent back with one demand, “More red!” With Megan on task as roving reporter, I sent her a selfie of the approved results. “Are you OK?” she quickly queried. Sniggering back, “I think this is what they mean when they say suffering for fashion.” In truth, I felt fabulous.

Hair and make-up done I searched for people I hadn’t seen since the SXSW panel in 2016. Poking my head in doors and around corners, I watched as others prepared for the show. Big hair, exaggerated make-up, teasing, fluffing, glittering – subtlety was not on the menu. My lips would barely blip the radar.

Immersed in a diversity of beauty, it was a harmonious cacophony. Height, gender, sexual orientation, nationality, race, age, color, able-bodiedness, shape, size – this was the melting pot of gold promised over the rainbow.

Back stage, I struck up a conversation with Vicci while her partner Emily sat down to make-up — neither strangers to camera or stage. Her first runway show, she wanted to bring her unique brand of confidence, strength, connection, and sizzle to the stage.

Betraying anxiety below her surface I inquired, “How old were you when you came out?” “I was 16,” she shared. Pointing toward an imaginary home run wall in the distance I said, “Your 16-year-old self is out there tonight. She doesn’t see the nerves. She sees your conviction, fortitude, and beauty — someone who has achieved her own dreams. You are her goals… something that feels impossible to who she is this very moment. She is who you are walking for today.” Fiery confidence returned to her face. 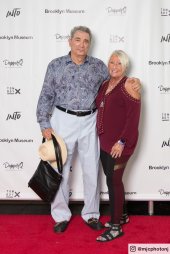 Doors at 6p – I glanced at my watch. 5:52pm! Time to corral the troops. The walk from hair and make-up to back stage cut directly through the lobby. To preserve the wizardry behind the curtain, we couldn’t reveal any of magic before the show. I nearly made it unseen – but mom and dad were first in line with tickets and saw me. One part busted and another part destiny, I hugged them as I ghosted back to the dressing area.

For all my talk, I hadn’t walked my walk. Practice time. My internal voice kept prodding me. ‘Hit the marks.’ ‘Pause.’ ‘Pivot.’ ‘Not like that!’ ‘Remove the blazer.’ ‘SMOOTHER now.’ ‘Place it onto your shoulder.’ ‘Don’t cover the butterfly lining on the vest.’ ‘WHAT ARE YOU DOING?’

Indi must have heard my inner voice screaming. After cheering me on they asked tentatively, “Would you like some feedback?” “Yes, yes, YES! Thank you!” We visualized the marks, the music, and the crowd. Allowing me to walk the end of the imaginary runway each time, Indi helped tweak my moves, focusing on the important details of the suit to display. After practicing a few more times to ingrain it like an unnatural state of natural – it was time to return the favor.

In David Bowie-esque glittery glam, Indi walked, hit the marks, and found the right swagger. At the end of the runway, Indi coyly raised their right eyebrow in an utterly disarming way. Signature move. “Nailed it!!” I gushed. The plan was to practice until it could be replicated back to back. Indi got playfully deflated each time the brow didn’t stick the landing. “Whatever you do on the runway will be perfect. Only 2 people know precisely how your brow should rise and fall. And I’m not telling.” Indi’s eyebrow game landed — on point.

Practice now complete, Joss, modeling for Jag & Co, approached me wide-eyed while still in street clothes – hair in pompadour/Mohawk splendor. Joss wore a tie cleverly looped around arms and shoulders, a hybrid suspenders/dapper holster look. Ready to tip our poker hands, we both revealed a pair of shiny eyes — betraying the hearts on our sleeves. I found an angel for the shoulder that Millz wasn’t occupying.

Once in Jag & Co finest, Joss now stepped with a dapper foppishness. The vulnerability in her eyes now pierced with a fierceness of purpose – a charming duality. We lined up for the runway, darting back and forth for photo-bombs, high fives, and pep talks.

As Jag & Co took the stage, I poked my head out to watch. I wooted at the top of my lungs not caring who saw or heard. Someone nearby leaned in and asked, “Hey, that’s your friend, isn’t it?” I nodded – eye and smile beaming with pride.

THÚY Custom Clothier was the second to last group to hit the runway. Fully present in both breath and body I stepped onto the stage — my walk to take about 35-seconds round-trip.

Approaching mid-runway I tugged my blazer sleeve – left first, then right. As the blazer came off I heard a roar! My pace and purpose steadied. Kim Geonimo captured the moment when my blazer seemed to defy gravity — featured by NBC Out with other stunning highlights from the show. Pivoting at the end of the runway for my walk back it started to sink in. A smile washed over my entire being. I DID IT! I REALLY did it! How I didn’t raise both arms in celebratory joy is beyond me.

The second time walking out was with the entire Thúy team. We looped through – clapping for the crowd and one another. I finally felt free to look at those in attendance. The faces, the styles, the people amassing at the 4th floor balcony peeking on. Once outcasts; now insiders. Once disenfranchised; now empowered. Everyone found a moment they could claim their own that night.

Head turning to my right, I lit up as I saw my mom, dad, and niece. I couldn’t stop from blowing a kiss. Before exiting the stage, I bowed to Thúy as she was about to step out for her moment in the spotlight. The team couldn’t stop ourselves from peeking out from behind the stage to watch, cheer, and celebrate Thúy.

While reflecting on the quest, I nearly overlooked the actual moments walking the runway. It was never really about that. It was about discovering the dream, the passionate pursuit, and the aggregate experiences along the way.

Every person in the Brooklyn Museum had a dream of their own. Many left with purpose anew inspired by the models, designers, or a realization that they have the power to fill a niche that wasn’t represented at the show. “You had the power all along, my dear,” Glinda finally reveals.

I think about the people in and at the show who lived larger than life that day only to skulk back into a closet after leaving. Being kicked out of your home, fired from your job, or subject of hate crime is still a reality. Are they not heroes for the revolutionary act of surviving each day with dream still intact?

We each do our part to make this world a kinder and better place. We do it not for the validation or credit. We do it so others can stand on our shoulders. We do it to forge new paths to freedom and self-acceptance. We do it so that others don’t have to fight the same fights… so that they can pave new roads for those who come after. We are just fertilizing soil so others can plant their own seeds.